There is something about playing cards that brings people together. Maybe it’s the simplicity of the game or the thrill of victory and agony of defeat that makes card games so addictive.

Playing cards have been a pastime for individuals and groups for hundreds of years. Thanks to digital technology, playing cards online is a fun, interactive way to pass time with friends and family from all over the world. Whether you are looking to enjoy a casual game after work or spice up your next party, there are several different ways you can play online.

Whether you want to play poker or something more traditional like gin, there is an online version of your favorite card game out there waiting for you. Let’s take a look at some of the most common card games played online as well as how to get started playing them!

An introduction to card games

First, let’s look at some of the most common card games, and their history. A card game is a game that uses playing cards as the primary device with which players interact.

Others, like Solitaire, Klondike, and Hearts, are relatively new and are chiefly played in North America and the United Kingdom. Still others, such as Rummy, bridge, and poker, are played in almost every country of the world and have become part of the international culture.

A playing card deck contains 52 cards, or 26 in the case of blackjack or other games that use 2 decks of cards, a card deck also contains 4 suits: Spades, Hearts, Diamonds, and Clubs.

Each player tries to create the best possible hand consisting of the 2 cards in their hand and 3-5 cards from the community cards. 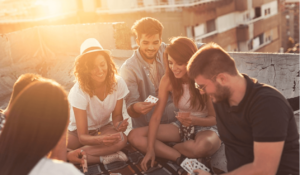 Card games like Rummy are a classic pastime and a favorite among many groups of friends. There are many different variations of the game, but the basic idea is to create melds, or groups of cards, from the cards available in your hand. The player who creates the highest-scoring meld, or the player with the fewest “dead” cards, wins the game.

Gin Rummy is one of the most popular card games online. You can play free online or against friends on any device with an internet connection. You can play Gin Rummy online in a few different formats.

Gin Rummy is most commonly played with 2 or 4 players, though some variations are played with 3 or 5 players. If you are playing with 2 players, you compete against an opponent. If you play with 4 players, you and your 3 opponents will be partners.

Texas Hold’em is one of the most popular games played online. It is a variant of 5 card stud, where each player is dealt 2 cards face down and the remaining 5 cards are placed face up for both players to see.

Each player then tries to create the best possible hand from their 2 card hand and the 5 community cards. Texas Hold’em is played with 2 or more players. If you are playing against another person, you will each be dealt 2 cards at the beginning of the game.

If you are playing with 2 or more players, you can choose to “ante” into the game, which means you make a small, optional deposit into the pot at the beginning of the game.

Card games are very popular as they are easy to learn and can be played anywhere with anyone. With the advent of technology, it is now possible to play cards with friends or strangers online instead of in person.

There are so many ways to play cards online, and each game has its own unique rules and strategies. If you are familiar with playing cards, you can choose to play a game that does not require any strategy and simply have fun with friends. If you are new to card games, there are several options where you can learn the rules as you play and enjoy yourself.

No comments to show.